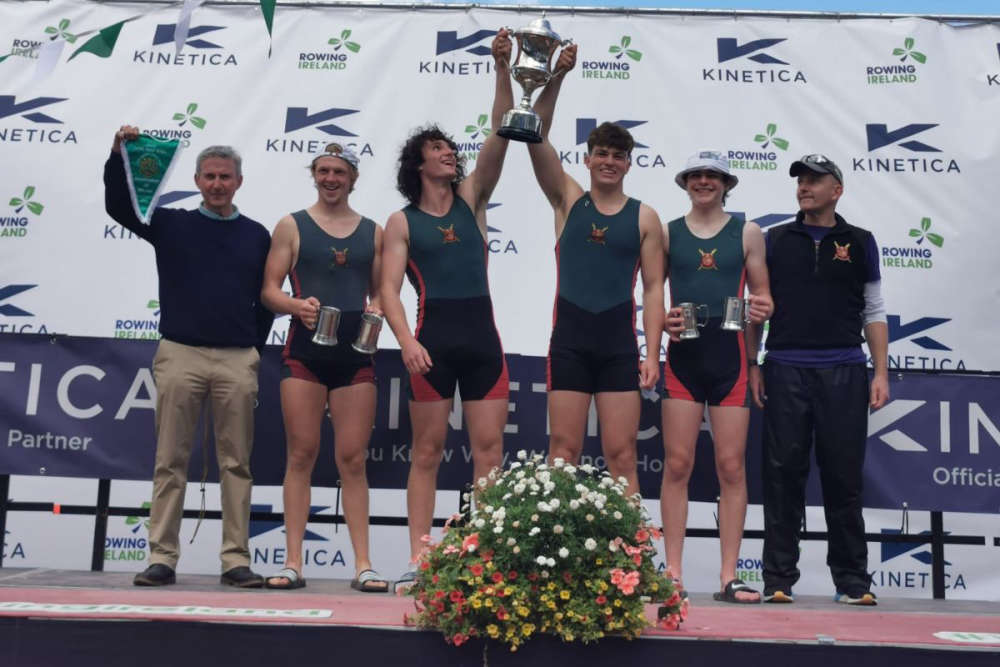 The All-Ireland Rowing Championships 2021 took place at the National Rowing Centre in Cork this past weekend, it took place under some strict COVID-19 guidelines.  The opening single sculling event on Friday 20th August was postponed to noon due to forecast of very inclement weather; however, the torrential rain did not deter exceptional performances from both Martin O’Grady and Donagh Claffey who advanced to the final. Both rowers had only returned from representing Ireland at the Jr World Rowing Championships in Bulgaria where they both put on a great display of ability at their first ever international rowing event. The torrential rain did little to distract Claffey as he powered through the field to claim Gold, which was a faster winning time to that of our Irish Olympian Gary O’Donovan who won the Men’s Lightweight scull final, Martin O’Grady finished 4th in this closely contested final. Cian Scanlon put in an admirable race but fell short of qualifying for the same final.

The weather was remarkably contrasting on Saturday morning with calm conditions with lengthy spells of sunshine which greeted the Mens J18 quads for their heats where both Athlone (A) and (B) crew were pitched against each other in heat 2. Athlone (A) produced a sublime performance winning their heat comfortably; however, despite producing a strong performance the lightweight Athlone B crew of (S) Zach Megan, (3) Harry Lough, (2) Cian Scanlon and (B) Liam Rowan, finished in 4th outside qualification in a time that would have placed them in the final as this was a quicker time than what was posted in other heat. A large following of parents, coaches and fellow rowers from Athlone Boat Club gathered to support and cheer on Athlone A Crew (S) Martin O’Grady, (3) Thomas O’Brien, (2) Donagh Claffey, (B) Cillian Lynum) as they led impressively from start to finish taking home Gold in what was a thrilling final.

On Sunday the sun warmed up the lanes for a blistering J18 Mens doubles final which provided a fitting stage for the dynamic duo of Martin O’Grady and Donagh Claffey to emphatically win comfortably over second place Skibbereen A. This strongly reflects their international pedigree given their wonderful performances representing Ireland at a global stage at the recent World Junior Rowing Championships in Bulgaria. This pairing had the best time of 24 crews in the J18 men’s doubles time trial which also witnessed a superb performance by Athlone’s B crew of Thomas O’Brien and Cillian Lynum that narrowly missed out on top 6 final places by a narrow margin of just 2 seconds.

This is an unprecedented national championship for Athlone Boat Club at this level as they were victorious in all their events at J18 men’s level this year.

The club committee would like to congratulate all crews representing Athlone Boat Club at this annual All -Ireland rowing championship event; notably, all rowers are educated and supported locally at the Marist College, who in the recent years have provided the club with gym equipment and financial donations of which the club is very grateful for. A special word of acknowledgement and congratulations from club president Paul Donovan to coaches Fergie Hannon, Paul Lynum, Mattie Lough and Alan Kenny, and to all rowers parents- the club now have an impressive array of highly sought-after national trophies to adorn the new boat house.